I can't believe I've been absent again, not through lack of baking though, but I've not had many successes of late.

I recently went to a Christmas ornament party, like Tupperware, but with hand made ceramic decorations. I've been to several of these over the years and am slowly building my collection. I'll share my latest additions when they arrive.

At this party there was a lovely spread of afternoon tea goodies and as the host is not only one of my closest friends but also a very generous person she sent me home with a plate of delicious treats.

The cornflake biscuits were soooo good. I rationed them out over the week just so they would last a little bit longer. The following weekend I made an attempt to make my own. And ohhhh what a failure.

I had looked online at several biscuits recipes, and altered a recipe that uses another cereal. I knew from the first batch  coming out of the oven that they just weren't right. I made a slight change to the remaining dough but nope, not the same as the original ones I'd had.

Into my inbox arrived the recipe.

So, because delicious food should always be shared, here is the recipe to try for yourself. 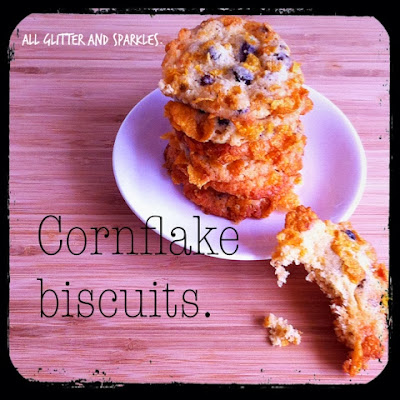 Cream together the butter and sugar until light and fluffy.
Add the egg and beat well.
Fold in the sifted flour alternatively with the sultanas.
Roll teaspoons of the dough in lightly crushed cornflakes.
Place on a greased baking tray in a moderate (180C) oven for 10 - 12 minutes or until the edges just turn brown.
Cool on the tray for a few minutes, before transferring to a wire rack.

Make a cup of tea, sit back and enjoy!

- not a fan of sultanas? replace with chocolate chips!

I may be linked up at these parties.
Posted by Unknown at 8:58 PM

Email ThisBlogThis!Share to TwitterShare to FacebookShare to Pinterest
Labels: biscuits