After a recent night out at a local vodka bar, my friends and I were keen to try out making our own infused vodka.


For my first attempt I used raspberries and apple. 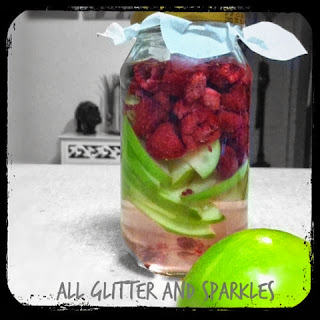 It's just so easy to chop up some fruit stick it in a jar and cover with some good vodka. From all descriptions I found online you just leave it in the pantry and give it a shake twice a day. Test the flavour every couple of days and if need be, replace the fruit after 7 days to increase the flavour or top up with vodka if the flavour is too strong.

This first try didn't develop a lot if flavour. But there was an apple after taste. Next time I will crush the berries.

My second test was using a black current puree. The flavour was great after just 5 days, but it wasn't pure black currents, they were in a syrup so the mix does need to be shaken prior to serving. 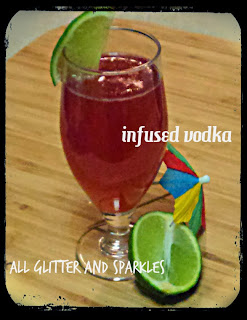 Serve straight or with a mixer with a wedge of lime.

I may be linked up at these parties.
Posted by Unknown at 11:00 PM

Email ThisBlogThis!Share to TwitterShare to FacebookShare to Pinterest
Labels: Drinks